I always wanted to be a rockstar… 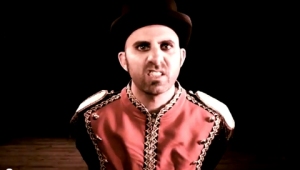 I’m not quite that yet, but I am a published musical artist on the Monsieur Grandin album, ‘Mister Dressmaking and the Patchwork Mind’.

I wrote the lyrics for ‘Devils Plight’:

And wrote and ‘sang’ the lyrics for ‘Tais Toi’:

I also become the scenarist for the album, helping Monsieur Grandin to arrange the songs so they formed a story, an experience for the listener, like a book, or a film but as candy for the ears.

I then also become ‘Mr. Loyal’ (the ringmaster), who is the narrator throughout the album, writing and reciting the intro, 3 interludes and an outtro.

‘Tais Toi’ we turned into a music video which I edited, where I brought Mr Loyal to life:

Monsieur Grandin subsequently formed a band, ‘Monsieur Grandin and his Patchwork Band’, and ‘Tais Toi’, and videos of the intro and interludes feature on a big screen behind the band when they play live.

I’m not the frontman for a band yet, but maybe, just maybe, I’ll front ‘Monsieur Grandin and His Patchwork Band’ for a track in the near future. I’m currently working on some written work for his next album, out early next year.